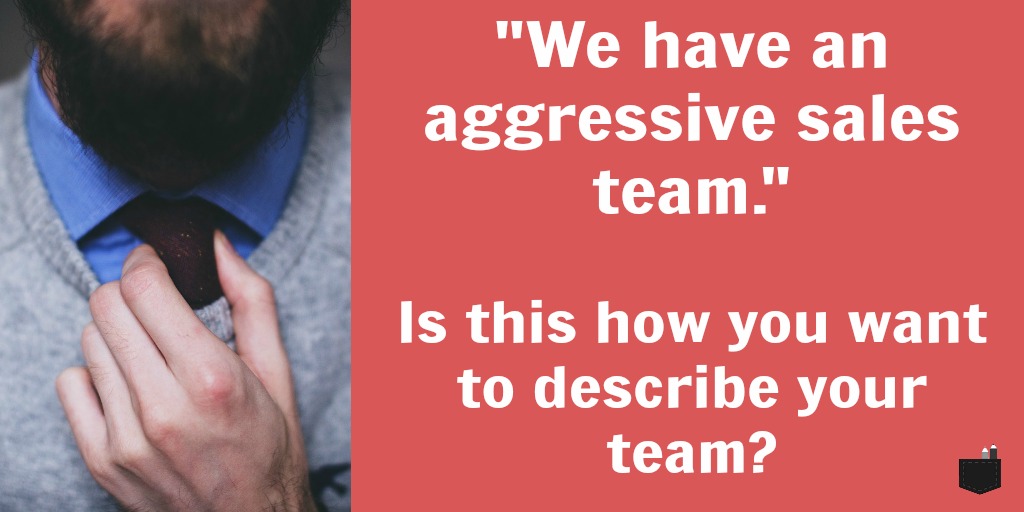 In business, people seem to love the word “aggressive.” You’ll hear people talk about how they network aggressively or how their sales team is aggressive. And when they say these things, they mean them in a positive way. But what are you really saying when you say that a person or way of doing business is “aggressive”? Are you unknowingly saying something that you don’t want to say? In this post, we’ll talk about what “aggressive” means in professional settings and why you may want to avoid using it in most cases.

The most traditional way to use the word “aggressive” is to use it to describe someone who is ready to fight or is displaying aggression.

For example, the Merriam-Webster dictionary primarily defines “aggressive” like this: “ready and willing to fight, argue, etc; feeling or showing aggression.”

Similarly, the Oxford Dictionaries defines “aggressive” like this: “ready or likely to attack or confront; characterized by or resulting from aggression.”

Based on these definitions, you would usually use “aggressive” in sentences like these:

As you can see, what “aggressive” means is something negative in each of these cases. After all, unless you’re getting ready to take part in an epic Game-of-Thrones-style battle, being ready to fight usually isn’t a good thing.

What “aggressive” means in business

Although we tend to think of “aggressive” as a negative trait, you don’t have to look far to see it used in the business world in a way that’s supposed to be positive. Just take a look at the headlines of these articles published by popular and respected brands:

In these headlines, the authors use “aggressive” as a synonym for “rigorous.” And so, to some extent, we’re used to seeing “aggressive” used to describe someone who is driven and results-oriented (which are positive traits).

This “positive” way of using “aggressive” has even made its way into established dictionaries. Specifically, in addition to the definition we showed you above, the Merriam-Webster dictionary also defines “aggressive” like this: “using forceful methods to succeed or to do something.”

Similarly, the Oxford Dictionaries also defines “aggressive” like this: “behaving or done in a determined and forceful way.”

“Forceful” usually means something negative, but “succeed” and “determined” are usually positive words. And dictionaries are often dinosaurs when it comes to change, so doesn’t it mean something if even they now define “aggressive” as something that can be positive?

Do you really want to be an “aggressive” brand or professional?

Although “aggressive” may not be as unquestionably negative as it used to be, it still doesn’t have the best rap. Just think about the last time you had to interact with an “aggressive,” pushy salesperson, the kind who makes you feel like you’re the one who’s being rude when you resist his or her tactics. We’re shuddering just thinking about it.

And it’s not just some sort of vague thought in the back of our minds or a bad feeling in our stomachs that makes us think that what “aggressive” means is still pretty negative. Just as there are several articles and blog posts out there that frame “aggressive” as something positive, there are also lots that frame it as something negative. Here are just some examples:

“Are You Assertive–or Aggressive?” on Inc.com

“The Difference Between Strong Leaders And Aggressive Leaders” on Fast Company

As these posts note, people still see a fine line between being “aggressive” and being “assertive” or “rigorous.” Which side of the line do you want people to see you on?

At first, it may sound impressive to say that you’re the most aggressive company in your market, but is this really a good thing? Even if it’s not what you mean, will people wonder if you’re a ruthless dictator or a brand that’s willing to do whatever it takes (no matter how shady) to succeed? The last thing you want to do is to make people run the other way.

Instead of describing your team or brand as “aggressive” think about whether “hardworking,” “enthusiastic,” “rigorous,” or “passionate” would do the trick instead. Don’t leave the door open for people to question your motives or integrity.

Looking for some tips on finding the right language for your brand? Check out our post on brand voice.