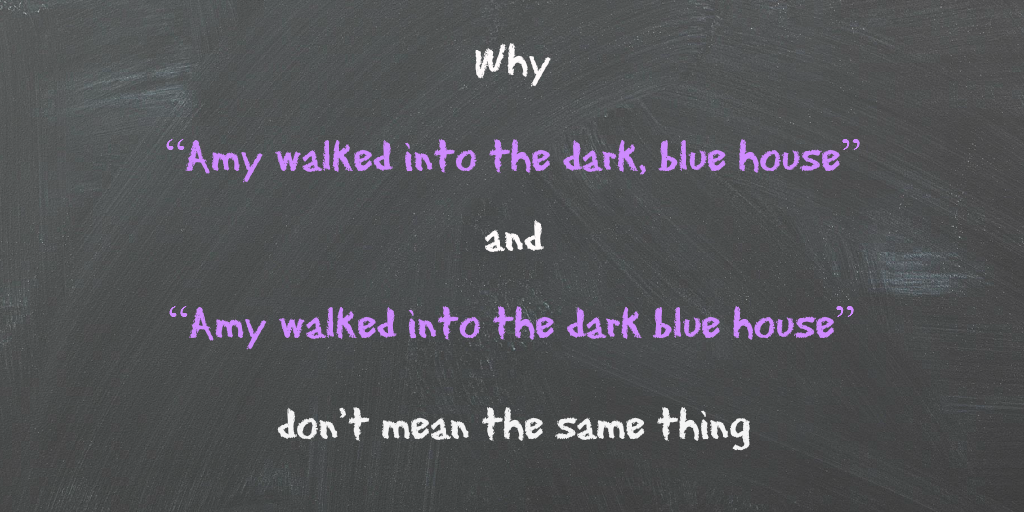 This sentence tells us that Amy walked into a house that was both dark inside and blue in colour. The comma between “dark” and “blue” tells us that these words independently describe the type of house that Amy walked into. That is, “dark” and “blue” are two separate characteristics of the house. In theory, the house could be dark but not blue. It could also be blue but not dark. In this case, though, the house is both dark and blue. When we’re writing sentences and we have two separate characteristics or qualities that describe a noun, we place a comma between them. You can think of the comma as replacing the word “and” (e.g., “Amy walked into the dark and blue house.”).

Now, let’s compare the sentence above to the one below:

This sentence tells us that Amy walked into a house that was dark blue in colour. Like in the first example, the adjectives “dark” and “blue” describe the type of house that Amy walked into. In this case, however, there is no comma between the two adjectives. Why? Because “dark” and “blue” together express a single characteristic of the house (i.e., the colour of the house); they don’t describe separate characteristics of the house as in the first example. That is, the house isn’t a house that’s both dark inside and blue in colour. It’s a house that’s dark blue in colour (i.e., “dark” describes the specific type of blue). Because it doesn’t make sense to place the word “and” between the adjectives if we’re using them to describe the colour of the house , we don’t place a comma between them.

Need to write a sentence where you have more than two adjectives describing a noun? No problem! Use the same approach that we talked about above.

Each adjective describes a separate characteristic of the noun:

The adjectives together describe a single characteristic of the noun:

Have any lingering questions about how to use commas to separate adjectives in sentences? Leave us a note in our comments section below and we’ll do our best to incorporate your questions into one of our upcoming posts.

0 thoughts on “How to use commas: Separating two or more adjectives that independently modify a noun”